— Written By Sally McNeill and last updated by Chris Austin 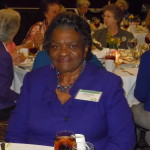 During the gala twenty-seven individuals were inducted into the Jane S. McKimmon Family and Consumer Sciences Hall of Fame, including Estelle Reed Coffey of Waxhaw, NC. Coffey has been a member of the Extension and Community Association for 54 years and during that time has served in many leadership positions within the organization. She has been President of her local club, Western Union Park ECA, as well as President of the Union ECA County Council and the District ECA. She has contributed countless hours to the service of individuals and families in an effort to help improve the quality of life within the community.

The ECA centennial gala at N.C. State began with an opportunity to see engraved bricks that have been placed in the Jane McKimmon Garden at McKimmon Center honoring the women of ECA, family and consumer sciences and their supporters. In 1911, Jane S. McKimmon, North Carolina’s first home demonstration extension agent, convinced 14 county superintendents of education to employ home demonstration agents to support the girls’ tomato club program to teach girls to can tomatoes. By 1913, the girls’ mothers had learned to can so well, they began to ask for clubs where they might learn other skills for the home. Thus home demonstration clubs – later named Extension Homemakers and now named the Extension and Community Association today — were born in North Carolina. The McKimmon Center on the campus of North Carolina State University was named in honor of Jane S. McKimmon and was built with seed money contributed by home demonstration members throughout North Carolina.

During the centennial gala there were also exhibits and a video showcasing the multifaceted work of ECA in the state, followed by a dinner, special speakers and the Hall of Fame presentations. North Carolina Secretary of Commerce, Sharon Decker, was the emcee for the evening.

Being one of the first inductees into the Hall of Fame is a big honor and speaks highly of Coffey’s contributions to ECA and to N.C. Cooperative Extension. A former Union County Family and Consumer Sciences Extension Agent, Gloria Baker, notes that Coffey has been well respected for her professional and effective leadership throughout the years. Current Family and Consumer Sciences Extension Agent, Sally McNeill, depends upon Coffey to motivate other ECA members and to provide guidance and support for the organization’s activities and service projects.

For more information about how you can become involved in Union County’s Extension and Communication Association, contact Family and Consumer Sciences Extension Agent, Sally McNeill at 704-283-3732 or find your county center on the N.C. Cooperative Extension website: www.ces.ncsu.edu/counties.