Find this article at:
go.ncsu.edu/readext?556428
— Written By Nancie Mandeville

Annually, the Farm City Celebration Committee selects and honors several Union County individuals, families, and businesses who excel in service to their communities, this county, and the state. This year’s Farm City Banquet was one to be remembered! The History of the Harvest – Celebrating 175 years of Agriculture in Union County, was well received as guests enjoyed a Sunday afternoon traditional meal, with bluegrass music and a local clogging group.

Guests were greeted by vintage pieces of farm equipment and antique tractors as they entered the facility loaned to us by The Union County Antique Tractor Club. As Union County 4-H Youth leaders lead attendees to their tables they were treated to a video detailing the rich history of Agriculture in Union County from its incorporation in 1842 until today. As the evening began, Ms. Judy Simpson presented a historical narrative on T.J.W Broome, Union County’s first agricultural agent. The event truly captured all the rich agricultural history of Union County. 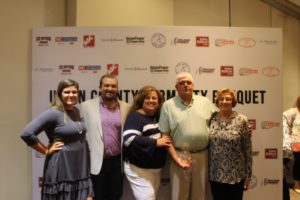 Phillip is a row crop farmer, poultry producer, and runs a grading service operation. Phillip is recognized for his community service; especially when it comes to providing grading services for community projects, several of which have been here at the Union County Ag Center, American Legion Post, and local schools. 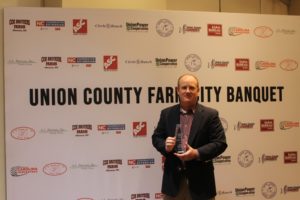 Dr. Jeff Broadaway, not only promotes agriculture in his current position as a regional livestock veterinarian serving southeast NC, but he also serves on many boards and positions relating to agribusiness. Dr. Broadaway has been involved with the Farm Bureau organization at a local and state level for many years. Even with his extremely busy schedule, Dr. Jeff still makes time to serve on his local community planning board and local church where he serves as the Chairman of Deacons.

The Business of the Year Award – Carolina Green (Chad Price) 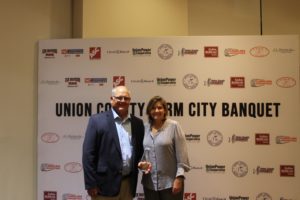 The Carolina Green Corp., located near Fairview, specializes in agronomy and turf management. Chad Price and his family have put Union County on the map when it comes to construction and installation of world-class athletic fields as they specialize in turn-key design, construction, and renovation of natural and synthetic turf sports fields across the county. Over 300 clients, many of which are professional or collegiate in nature, look to the Carolina Green Corp. for design and development of their athletic complexes. 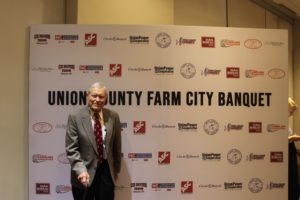 The UC Agricultural Hall of Fame Award recognizes an individual whose accomplishments have helped shape the importance and direction of agriculture in this county. These accomplishments can be made through a career and/or community. You don’t have to be famous or rich to receive this award, but this person does have to enrich the lives of others in Union County.

Tom Morgan was like a lot of other guys finishing his military service at the end of WWII. He went to college on the GI Bill and received a job as the 4-H Agent in Union County back in the day when a house that was wired for electricity had one light bulb with a pull chain hanging from the middle of the ceiling and indoor plumbing was not typical. In those days in rural America, teaching children how to sew, can, garden and raise livestock made a big improvement in their lives. He instilled initiative in people at a young age to do better. Tom continued this when he became an Extension specialist here working with local Farmers to improve their methods. He later became the Director of the local ASCS office where he administered government farm programs. Rather than just doing what he had to and collect a salary, Tom promoted farm programs that required a lot more work on his part but benefitted Union County Farmers in the process. His efforts turned many good Farmers into Agri-businessmen that continue to move Union County forward. 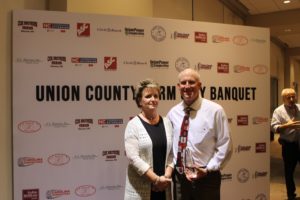 This award, given by the NC Association of Soil and Water Conservation Districts, “recognizes farmers and farm families who are actively taking the initiative to implement sound, innovative and cost-effective conservation techniques, and are actively involved in conservation education”.

This year’s winner in partnership with the Union County SWCD and the Natural Resources Conservation Service has implemented a number of conservation practices on their land including cattle exclusion, cover cropping, no-till farming, litter sheds, energy reduction equipment, and many more. The farm also participates in the Voluntary Agricultural District Program, which helps to preserve farmland for future generations. 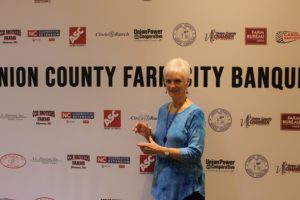 Since the inception of the Union County Agricultural & Conference Center and the opening of its doors on Nov. 2005; there have been many outstanding citizens that have committed numerous hours of volunteer time and effort to ensure this facility’s development and continued success. Because of these citizens and their efforts, this facility is recognized as the most beautiful in the South-Central District.

Sherry has been involved with Extension for over 25 + years and has always without a question been ready to help with any endeavor that we put in front of her. Sherry was a volunteer and served in many capacities with the Farm City Celebration Week. Anything from helping cook for the Food Gala, to helping serve the food. Sherry helped Gloria Baker with her annual event at Rolling Hills Country Club. She and her husband Landon always attended the Horn of Plenty event. Sherry still continues to serve on the Farm-City Committee today.

Sherry continues to give her knowledge back each year with our 4-H Summer Fun Program by teaching a sewing class to youth. Sherry served many years on our Extension Advisory Council and served as Chairman for several years. Sherry has also served as President on our 4-H & Youth Development Foundation, Inc. 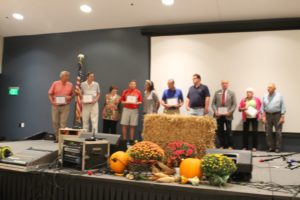