Find this article at:
go.ncsu.edu/readext?565036
— Written By Debbie Dillion and last updated by Nancie Mandeville 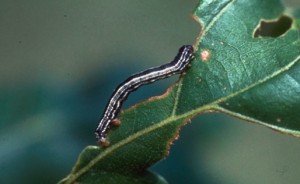 Eggs of both the spring & fall cankerworms hatch about the same time as the buds swell and leaves begin to emerge. They feed on the leaves until about mid-May and then drop from the trees on web-like strings to return to the soil where they pupate and will emerge again as adults in fall & late winter.

In our area, trees can be banded beginning around this time of year with sticky material to prevent the females from climbing up the trees to lay eggs. Tree banding is done by wrapping a narrow band of cotton batting or fiberglass insulation around a tree trunk then wrapping this material in plastic or tape. A sticky material, like Tanglefoot™, is applied to the plastic to catch female moths as they climb. The batting helps fill bark grooves to prevent moths from getting under the band. Timing for installing the tree bands is ideally after leaf fall and after we have had the first hard freeze or 3 days with temperatures below 30°. The banding should be checked periodically because the bands may become covered with female moths or debris allowing later moths to crawl over the bodies of their unfortunate comrades continuing up the tree to lay their eggs. Banding should be removed from the trees by May 1.

Favorite host plants for these caterpillars include apple, ash, beech, birch, boxelder, cherry, dogwood, elm, hickory, linden, maple, and oak. Oaks are the tree you see most commonly wrapped in our area. Most local hardware stores, farm stores, and garden centers usually have the supplies needed for banding your trees.