How Green Is Your Grill?

Find this article at:
go.ncsu.edu/readext?604618
— Written By Debbie Dillion and last updated by Nancie Mandeville 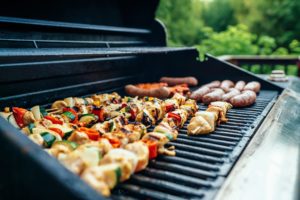 Photo by Evan Wise on Unsplash

Memorial Day is often considered to be the beginning of summer. And summer means grilling! Grilling is a great way to cook fresh meats and vegetables quickly, make a meal more festive, and delegate some of the cooking responsibilities. Cooking organically is all the rage, but which grilling method is the best for the environment and for you?

You have several types of fuels to choose from ‐‐ gas, electricity, or charcoal. Each has its own environmental and monetary costs.

Gas and electricity are quick and don’t leave much of a carbon footprint. But both are lacking in that you don’t get that wood smoke flavor added to the food.

Charcoal, the third fuel option, is made two different ways; one method is much more organic than the other. The commercial method uses leftover sawdust, combined with binders, including coal dust, sodium nitrate, limestone, borax, and lighter fluids, and bakes them into briquettes. Regular and self‐lighting charcoal briquettes pollute the environment with volatile organic compounds (VOCs), a dangerous ozone‐causing pollutant. Every year Americans alone release over 14,000 tons of VOCs into the atmosphere from the 46,000 tons of lighter fluid burned through charcoal grills. The ash from charcoal briquettes contains chemical residues and must be disposed of in the garbage.

Natural lump hardwood charcoal, on the other hand, is carbon neutral or even slightly carbon negative if the ashes are used as a bio‐char soil amendment. Nothing compares to the flavor of natural lump hardwood charcoal ‐‐ it is the fuel of choice for barbeque masters. This type of charcoal is made from wood allowed to dry in a kiln. This process releases the same amount of carbon dioxide as if the wood was allowed to decay on its own in the forest, and it imparts a smoky flavor to foods that complement meats, poultry, fish and vegetables. Hardwood lump charcoal burns hotter and cleaner than briquettes and is much easier to light ‐‐ even without lighter fluid. Even the leftover ash is good for the environment, as its alkaline properties neutralize acidic soils.

I recently purchased a grill that uses hardwood pellets. This method does use electricity and the food is cooked indirectly. You get the good smoke flavor in your food, but not necessarily the searing as you would if the food were exposed to direct heat. So if you are in the market for a new grill, read up on those that use pellets. It could be an alternative, leaving a small carbon footprint that you might consider.