— Written By Debbie Dillion and last updated by Nancie Mandeville 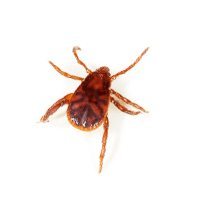 Ticks are most active between April – September. When seeking a blood meal, ticks crawl up onto grass or shrubs where they attach themselves to an animal as it passes by. Once a tick is on a host, it crawls upward in search of a place on the skin where it can attach to take a blood meal. The tick’s mouth parts are barbed, making it difficult to remove the tick from the skin.

Take the following steps to protect yourself from ticks:

‑ If possible, avoid tick-infested areas such as tall grass and dense vegetation

‑ Wear light-colored clothing so ticks can be found easily

Ticks are best removed by using tweezers and grasping the tick at the point where it is attached to the skin. Do not twist or jerk, pull slowly to avoid leaving the mouthparts in the wound. Do not use nail polish, petroleum jelly, alcohol, or hot matches to remove the tick. Wash the area with an antiseptic after the tick is removed. Kill the tick in rubbing alcohol and keep it in a small vial in case any disease symptoms develop. In any case of suspected tick-transmitted disease, consult with a physician.