— Written By Andrew Baucom and last updated by Nancie Mandeville 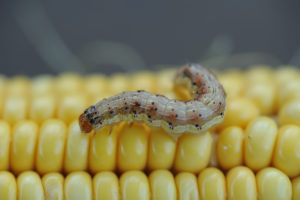 We have a number of effective insecticides for corn earworm in North Carolina soybeans. One of these is the insecticide chlorantraniliprole, which an active ingredient in Prevathon and Besiege. Because we are entirely reliant on this insecticide to control corn earworm (bollworm) in Bollgard II, WideStrike, and TwinLink cotton, I am encouraging growers to avoid this insecticide in soybeans to preserve it in cotton. In addition, soybean looper is resistant to this insecticide and generally shows up in the biggest numbers a few weeks after earworms. If Besiege or Prevathon is sprayed for earworm, by the time loopers show up, there are still small amounts of this insecticide left in the plant; this scenario will likely increase levels of resistance in soybean looper populations. Therefore, growers should use Blackhawk, Intrepid Edge, or Steward to control corn earworms in soybeans.

Treating once flowering: Recent studies in NC, funded by the North Carolina Soybean Producers Association, proved that earworms will eat flowers, but that we can tolerate very high populations (up to 3x the podding thresholds) without experiencing yield loss (note these studies were done with a determinate variety). The interaction of earworm feeding on blooming soybeans and yield is complex. Flower number and number of flowers fed on by earworms is related to yield. Perhaps unsurprisingly, the more flowers injured by corn earworm and the fewer number of flowers on the plant, the lower the yield. However, there is no direct relationship between earworm numbers during blooming and yield. So earworm numbers during blooming are not a good threshold to use when making a spray decision.

While we don’t understand this phenomenon fully, I suspect that it has a lot to do with the soybean plant’s ability to compensate. My recommendation is to only treat earworm in blooming soybeans if they are present at the podding threshold levels and if the plants are stressed. If the plants are not stressed, they will compensate for earworm feeding even at high populations, perhaps by retaining flowers, creating more seeds per pod, or filling out heavier pods. One caveat is that earworms present during blooming could potentially remain once pods are present. We know the yield loss potential at this point is great, so scout fields with earworms during blooming (R1-R2) closely to eliminate them once pods are formed (R3).