Find this article at:
go.ncsu.edu/readext?702186
— Written By Andrew Baucom (4 weeks ago) and last updated by Nancie Mandeville 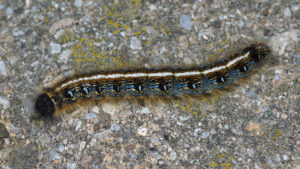 Eastern tent caterpillars are common native insects that create silk webs or tents in the branch crotches of some tree species. Their favorite is rosacea species, such as cherry and apple. We’ve got reports this past week of tents which have become large and noticeable. The caterpillars become active much earlier in the spring.

Tent caterpillars have one generation per year. They overwinter as eggs glued to twigs of host trees. The egg cases look like gray foam wrapped around twigs. The eggs hatch in early spring usually around 50 Growing Degree Days and this typically will occur sometime in March. The caterpillars feed together and build a nest in crotches of trees. This helps distinguish them from Fall webworms which make tents later in the year at the ends of branches.

Eastern tent caterpillars often affect the same trees year after year. This is probably because they pupae in protected areas like woodpiles or under bark near the tree where they attached. They prefer cherry and apple trees so that when the female moths emerge in early summer they found the same trees to which to lay eggs.

Eastern tent caterpillars can defoliate small trees or trees with multiple tents. Even so, permanent damage to the tree health is unlikely the best management is to prune branches containing this to remove the caterpillars. In some cases, it is enough just to damage the tents with a pole so caterpillars fall to the ground and predators and birds can access the nest.