Find this article at:
go.ncsu.edu/readext?717013
— Written By Andrew Baucom (2 weeks ago) and last updated by Nancie Mandeville 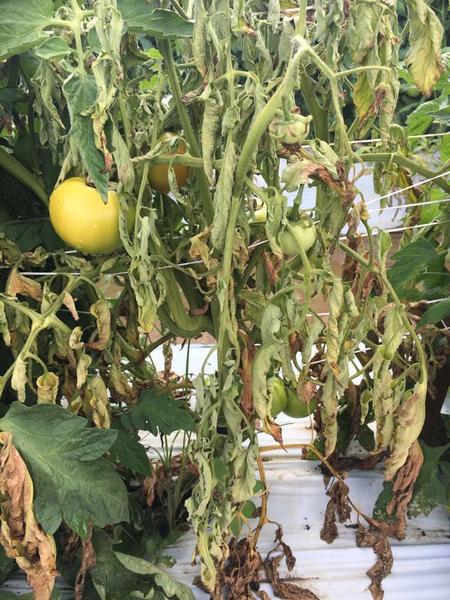 Today I would like to talk with you about Southern Blight of tomato and many home gardens right now with the temperatures rising and lack of rainfall folks are seeing some necrotic areas on their tomatoes and some general dieback overall. Southern blight also known as Southern Wilt and Southern Stem Rot can be a serious and frequent disease of vegetable crops here in North Carolina. This was first reported on tomato but it also occurs on many other crops including peppers, beans, cantaloupes, and many other common vegetables.

High temperatures as we have been experiencing lately here in Union County create aerobic and moist conditions and acidic soil also favors this disease development. In North Carolina, the disease first appeared in hotspots in fields or garden rows in early to mid-summer and progress until cooler dry conditions prevail.

On tomatoes and peppers, the most common symptoms occur in the lower stem where it’s in contact with the soil. Initially a brown to black lesion usually develops on the stem near the soil line. This lesion develops rapidly and can completely girdle the stem which will cause sudden permanent wilt of all above-ground parts and young plants may even fall over at the base of the soil. Under moist conditions, the white mycelium will typically develop on stem lesions and can sometimes extend several centimeters up the stem of tomatoes and after a few days, tan to reddish-brown sclerotia can appear on a mat of mycelium. The fungus can easily infect fruit that is also in contact with infested soils and lesions will appear as sunken and slightly yellow areas that later become water-soaked soft and star-shaped spots.

General disease management for southern blight can be difficult it’s difficult to manage when inoculum density is high and environmental conditions favor disease development. However, losses can be reduced by adopting the following management strategies. First, off you want to avoid planting in fields were a history of Southern Blight has been present. You want to make sure that you’re rotating your crops with corn, wheat, barley, any other non-host crops to reduce the inoculum levels in the soil. Try to modify your plant dates to avoid conditions that favor disease development when possible. Also, inoculum levels can be reduced by burying infected plant degrees and sclerotia or deep plowing to invert the soil in fallow times of the year. You also want to ensure the previous crop has decomposed prior to planting. This may require some disc in the field several times in the spring or in the late fall after harvest. You also want to look at your soils you want to maintain adequate soil pH for optimum plant growth as lower soil PH will encourage the disease.