Find this article at:
go.ncsu.edu/readext?726933
— Written By Mikayla Graham (4 weeks ago) and last updated by Nancie Mandeville 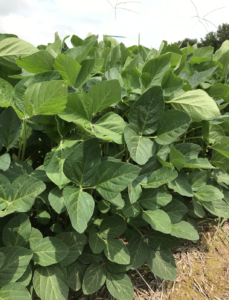 Hello, this is Mikayla Graham, Union County Field Crops Agent with
today’s Cooperative Extension Report. There have been many questions
about insect management in this year’s soybean crop. Because of the
crazy weather we’ve been having, beans are in almost every growth
stage, allowing for some insect populations to last longer in the
season than what is normal. In other parts of the state, there has
been some evidence of pod diseases, likely brought on by stink bug
infestation. Stink bugs have piercing mouthparts, allowing them to put
holes in pods and seeds, which can be a vector for diseases. Though
yield-reducing numbers have not been seen yet this year, it could have
an impact on your grain quality. So, it is very important to scout for
stink bugs at the seed’s most vulnerable stages. These are R4, which
is full pod, and R5, which is beginning seed. Stink bugs will begin to
move into soybeans as corn and cotton become mature and are harvested.
Continue to scout for insects, and remember the threshold for stink
bugs is 5 bugs per 15 sweeps. If you have any questions about insect
or disease management or growth staging soybeans, please contact me at
7044412624.