Halloween Customs: Where They Came From

Find this article at:
go.ncsu.edu/readext?632756
— Written By Debbie Dillion and last updated by Nancie Mandeville 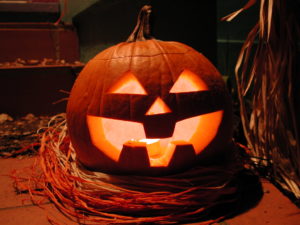 To the ancient Scottish and Irish, Halloween or All Hallow’s Eve involved rituals and games foretelling the future, particularly marital prospects. Several of these rituals involved crop plants and have their origins in agrarian societies.

One ritual, described by Robert Burns, a famous Scottish poet, in his poem “Halloween,” was that of pulling up stalks of colewort, a type of cabbage. Blindfolded and holding hands, the youth went into the garden each pulling the first colewort he or she came upon. The length of the stalk would foretell the height of the future spouse, and the amount of earth clinging to the roots indicated the couple’s fortune. The stalks were then hung over the door one by one. The first names of those who happened to walk through the door were believed to indicate the names of the future spouses.

Another ritual practiced by young Scottish women was intended to indicate if their suitors were faithful. The woman placed two nuts on the fireplace grate naming one after her boyfriend and one after herself. If the nut representing the loved one jumped or cracked, it was thought that he would be unfaithful. I f the nuts representing the woman and her suitor burned simultaneously, this foretold that they would be married.

The contemporary Halloween rite of trick-or-treating stems from this Irish custom:  Irish farmers would go in groups from house to house collecting food for poor villagers. Those who gave cheerfully were promised prosperity, while less generous contributors were threatened.

The Jack-o’-lantern is another contemporary custom claiming Irish origin. According to legend, an old drunkard named Jack made a deal with the devil and then tried to renege. The devil angrily threw a live coal at Jack, and it landed in a half-eaten turnip in Jack’s hand. The result was the first Jack-o’-lantern. Early Jack-o’-lanterns were made from turnips. It was when the Irish came to the United States that pumpkins were substituted for turnips.

A fun family outing on a beautiful fall day would be to visit some of the pick-your-own operations in our area to select your own pumpkin. Check out Pumpkin Patches and More to find farms near you.