Find this article at:
go.ncsu.edu/readext?583645
— Written By Debbie Dillion and last updated by Nancie Mandeville 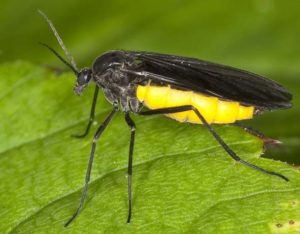 Adult fungus gnats are delicate, gray, dark gray, or black fly-like insects about 1/8” long that resemble fruit flies. They are often seen running over the soil surface of houseplants, especially ones that are over-watered. Adult fungus gnats do not damage plants but are objectionable and a nuisance. In heavy infestations, they can be very annoying by flying around your home or office and into your face. I had a colleague who had plants in his office and we would have a routine infestation of these pests because he always kept his plants too wet. Everyone in the office had these little boogers flying in their face!

Female fungus gnats lay up to 300 eggs on the soil surface which hatch in five to six days. The immature fungus gnat lives in the soil and is a white, translucent larva with a shiny black head. The larvae feed on any organic matter and can attain a length of about ¼”. Three to four weeks are necessary to complete the life cycle. Soils containing large quantities of decaying vegetative and those high in organic matter are most likely to host fungus gnat larvae.

Control and prevention of fungus gnats come in several forms. For infested plants, allow the soil to thoroughly dry between waterings. This will kill the larvae through desiccation. If the plant is of a type that cannot be allowed to dry out, immerse the pot in water and allow it to stand for an hour or so. This should drown the fungus gnat larvae. If this doesn’t work, drench the soil with a pesticide labeled for use on houseplants and for control of fungus gnats. Be careful to properly measure and apply these pesticides according to directions for use in a house and take care to provide adequate ventilation.

The best way to prevent new or future infestations of fungus gnats is to follow proper watering practices. Houseplants in the winter normally do not require as much water as at other times of the year. Whenever possible, allow soil surfaces to dry completely between watering. A wet environment is an open invitation to fungus gnats as well as a host of other problems such as root rot and stem rot. Don’t just water on a set schedule. Use the “finger method” to determine if you need to water – for an 8” pot, insert your index finger to the first knuckle. If moist, no need to water, if dry, water is needed.