Find this article at:
go.ncsu.edu/readext?619447
— Written By Debbie Dillion and last updated by Nancie Mandeville 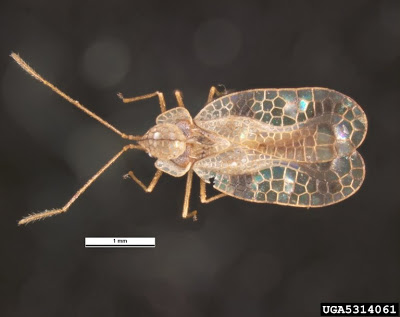 One of the most damaging pests to the Rhododendron species, Azalea Lace Bug can infest large or small plantings of this garden favorite, ravaging the leaves. Unfortunately, infestations often are not noticed until the foliage is badly damaged, usually after the numbers of insects have dwindled to where spraying won’t do much good. Lace bug injury usually becomes most noticeable in August as a bleached or stippling of the upper leaf surface. This leaf injury can give an azalea a grayish-green look and reduce the strength of the plant.

The first step to managing this pest is to examine the underside of the leaves of your azalea and rhododendron plants beginning as early as March. You should continue to monitor the plants weekly through spring and summer. A sure indicator that lace bugs have infested the plants is a rusty-brown color on the undersides of the leaves that looks like soil has splashed onto them, but it is actually the insect’s excrement. Control measures should be applied when the adult insects are first found on the foliage of deciduous plants and when colonies of nymphs are found on evergreens.

Lace bugs lay their eggs in the leaf tissues along the veins of azalea leaves. There are usually two or more generations per year. Hatch dates are relatively dependent on the weather. If the spring is unusually warm then expect an earlier hatch while a cool spring may postpone their emergence. Nymphs when first hatched are almost colorless eventually becoming black and spiny.

The adults are 1/8” long with thin lacy wings dotted with brown and black markings. The nymphs and adults cause their damage by sucking the sap from the underside of the leaves of the azalea. This feeding results in the gray splotched appearance on the upper leaves. Later in the season as the tissue around the tiny wounds die the damage manifests itself to the dismay of the gardener.