Find this article at:
go.ncsu.edu/readext?692248
— Written By Debbie Dillion (3 weeks ago) and last updated by Nancie Mandeville 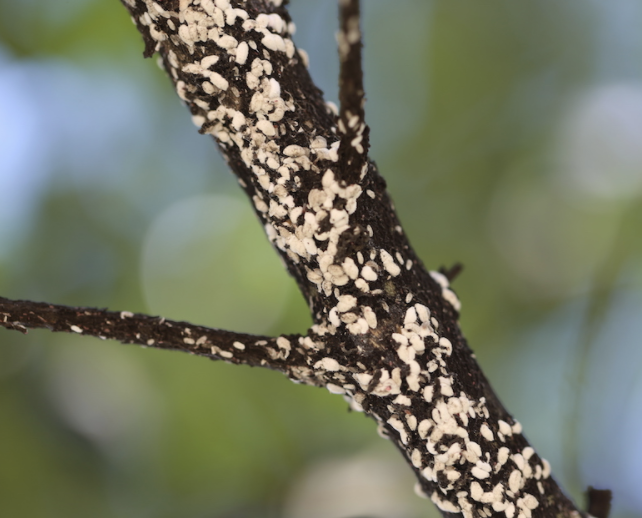 Many landscape trees and shrubs have been over-planted because they are maintenance-free, because they are a fast-growing screen, or because they give us beautiful flowers or breath-taking fall color. Too much of a good thing can lead to problems down the road. That has happened with the crape myrtle. Crape myrtle bark scale has made its way to North Carolina and we have a concentration in the Charlotte region putting all crape myrtles at risk.

Crape myrtle bark scale is a felt scale. The female scales produce fluffy white filaments that cover their body. These filaments protect them from contact insecticides. In spring the females produce eggs beneath their body then die. Tiny crawlers hatch from the eggs, then crawl around on the stems until they find a place to settle and feed. As soon as they settle they begin producing the white filaments to cover their bodies.

There are at least 2 overlapping generations each year. All stages are present now on landscape trees according to Stacey Jones, Area Specialized Agent, Commercial Nursery, and Greenhouse, in Cabarrus County. This means that all stages should be on any crape myrtles that may be infested in Union County as well.

Populations of crape myrtle bark scale usually get established in rough areas around branch collars, so look for them in this area of the plant. As the population increases all the bark on the trunk and stems may be covered. These scales are most often noticed because trees become covered in black sooty mold. If you notice unusually heavy honeydew and sooty mold on crape myrtles take a closer look at the bark. Since crape myrtles flower continually and attract a wide range of pollinators you need to be selective and cautious when choosing an insecticide to control the crape myrtle bark scale. Horticultural oil applied when the plants are dormant would be a low toxic option.