Find this article at:
go.ncsu.edu/readext?699161
— Written By Nancie Mandeville 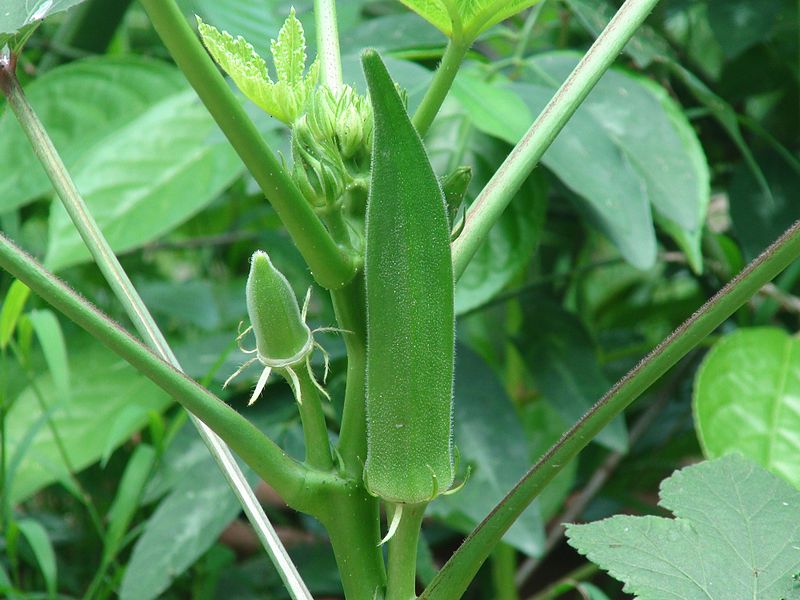 Okra is a garden staple in many vegetable gardens in the Piedmont. The first summer after I moved to Union County I noticed large plantings in vegetable gardens all around the county. I have always grown okra in my own garden and love it for the tropical look of its large leaves and ornamental flowers as much as for the edible pods it produces. The flowers are edible and make great additions to salads, just don’t pick them all as the flower, once pollinated, produces the pods.

This is one crop you can grow that can handle the heat of our North Carolina summers. It is a member of the Mallow family which includes cotton and hibiscus. You can see the resemblance to these plants in the flowers and the leaves.

Okra seed should be sown when soil temperatures are above 65°. It likes a well-drained soil, high in organic matter, with a soil pH around 6. If you haven’t tested your soil, use a complete fertilizer but don’t overdo. Too much nitrogen can result in lots of growth and reduced flower & fruit production. Though fairly drought tolerant, keeping the soil moisture level uniform is critical for pod set and development.

Okra should be harvested while small, within just a few days after it develops from the pollinated flower. When the pods grow larger, they become tough and fibrous making them inedible. If you allow the pods to grow large it actually inhibits new pod production and reduces its productivity.

Often in the hottest and driest part of the summer in mid-July to mid-August, okra may slow or cease flower production. If this happens, you can try a method called ratooning – you simply cut the stems to 6-12” above the soil. Then fertilize and irrigate to stimulate new growth, and you will be rewarded with flowers and fruit until frost (not to mention you will be able to reach the fruit to harvest it!).

Okra can be eaten fresh, boiled, in soups and gumbo, and fried. Paige Burns a colleague in Richmond County recommends quick frying cut okra in a hot skillet with plenty of butter, and salt and pepper to taste, for a great alternative to the traditional breaded version.