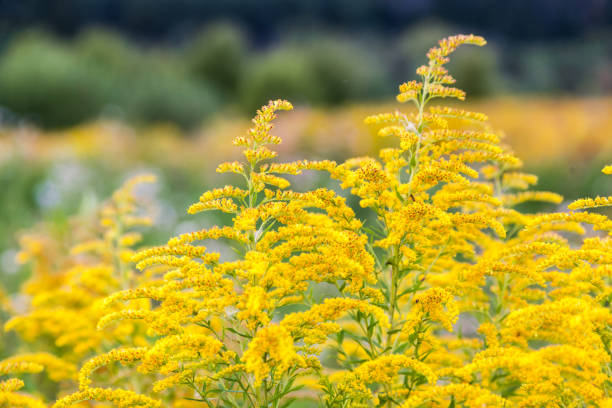 The bright yellow plumes of the Solidago species that wave gracefully along roadsides and in waste areas from July until November have drawn the attention of American gardeners for the past several years. Because of its ability to survive roadside conditions, it is an ideal candidate for low water use areas in the home landscape.

Unlike many tall flowers, goldenrod grows sturdy and upright, thus requiring no stakes. Plant forms tend to improve under cultivation, but some goldenrod can become aggressive and weedy (almost invasive) in rich soil. When purchasing plants, watch for signal words like colonizes or spreading and instead look for varieties that say clumping.

Goldenrod is a showy, conspicuous plant and because of that, it has often been blamed as the cause for fall hay fever. Actually, ragweed (Ambrosia spp.) is the major culprit of nasal distress. Ragweed blooms at the same time as goldenrod, but its small, dull, yellow-green flowers do not attract the eye of humans, nor many insect pollinators. For fertilization, the ragweed plant produces large quantities of lightweight pollen that are carried by the wind to other plants. By comparison, goldenrod pollen is too heavy to be airborne long, and bees are the principal pollinators.

Most garden catalogs feature a few varieties of goldenrod for sale. Local nurseries also usually carry a selection of goldenrod.