Acceptance of New Bees in the Springtime

Find this article at:
go.ncsu.edu/readext?792860
— Written By Andrew Baucom (2 weeks ago) and last updated by Elisabeth Purser

Springtime for beekeepers is synonymous with starting new colonies, especially since winter losses have been hovering ~25% every year so that beekeepers need to recoup their numbers. There are three main ways to start new colonies of honeybees. The most recommended method is to make or purchase a local nucleus colony (“nuc ”) from an authorized vendor, which typically includes five frames of brood, food stores, and a laying queen. These can be pricey (although well worth the cost), but their availability is often quite limited because of the very high demand. A second way is to see if you can capture a swarm from another colony, but while free for the beekeeper this method is unreliable, risky, and out of one’s control.

One of the more popular means of starting a new colony is to do so with a commercially produced “package” of honeybees. A package consists of a cluster of workers (~10,000 bees weighing approximately 3 lbs.) and a newly mated queen (bred by a queen producer) housed in a wood and screen box to facilitate transport (more information can be found in our Beekeeping Note on packages). Package distributors sell these units to beekeepers across the U.S. each spring to replenish winter colony losses, and they tend to be cheaper because they do not include frames of brood or food. This is also why new colonies from packages can be harder to get established—because so much effort has to be placed into making new wax comb and bees—and as such colonies started from packages rarely make surplus honey in their first year (unlike those started from nucs). 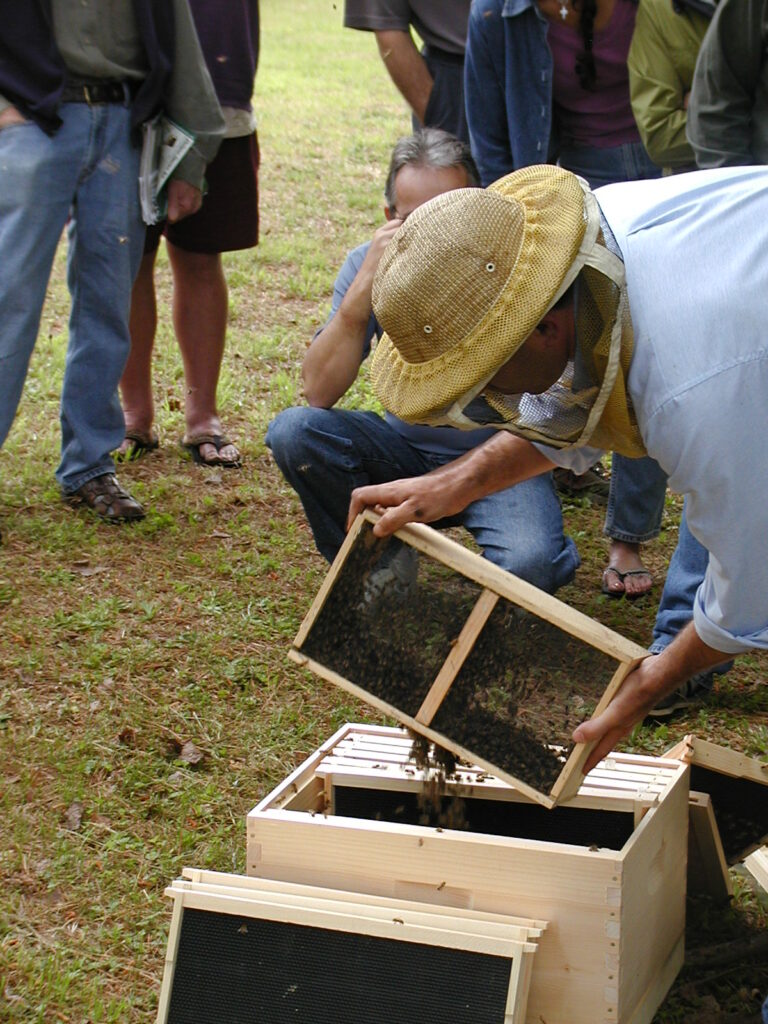 There’s another problem that is frequently encountered when installing packaged bees: rejection of the caged queen. When packages are established, usually by large-scale beekeepers in the southern tier of the country, they shake the adult workers from one (or several) colonies into the screened box, but the caged queen is introduced from a completely different colony. As such, the workers and the queen are unrelated to each other, and thus it can take some time for the workers to accept her. However, anywhere from 20-50% of newly established colonies from packages can either fail outright or reject their queen, often raising a new one in her place and setting the colony back several weeks during a very stressful time for the colony.

So, if you have some colonies that survived the winter but are establishing more colonies using packaged bees, consider taking a single frame of open brood (ensuring that the queen is not on it!), brush off all of the bees back into their original hive, then place it into the empty hive just before you install the package. If you don’t have any overwintered colonies or are just starting your apiary, ask a beekeeper mentor or another member in your local club for a frame of brood (remembering that young larvae need to be kept warm and can only survive outside of the colony for ~20-30 minutes). When we transfer frames of brood, we do so in a nuc box with a jar of hot water to keep it incubated while in transport.

Losing the queen just as the colony is getting established is a frustrating event for the beekeeper and highly disruptive for the colony. Anything to minimize that possibility would be welcomed, so this new tip might significantly help improve establishment success.