Find this article at:
go.ncsu.edu/readext?869424
— Written By Debbie Dillion and last updated by Elisabeth Purser 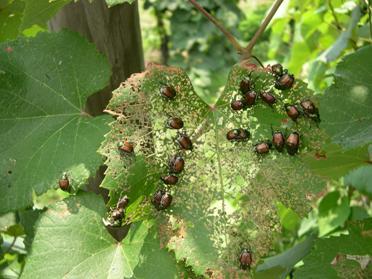 Hand-picking is an option that is easy for homeowners to do. Just go out early in the morning and place a container that has soapy water in it underneath the area where the beetles are. They tend to drop off the plant when disturbed, so if you start to pick them off, they will drop into the soapy water and drown. If you can hand-pick the first few that appear, you may be able to reduce the number of others that may show up.

Trapping is another option. Some folks often get wrong because they place the trap near the plant or plants they want to protect. Place the traps away from the plants you want to protect so that you draw the beetles away from them. The bags that come with the traps can fill up in a day, so you will have to empty them on a regular basis for the next few weeks. Be aware that if you live in the rural parts of the county where there are pastures, the beetles will be attracted to the traps and you may have more than if you did not use the traps at all.

The damage done to foliage and flowers of ornamental plants is mostly aesthetic, though there are insecticides that can be used. If you choose to use an insecticide, be sure to read and follow the label directions and take all precautions to protect beneficial insects and pollinators. 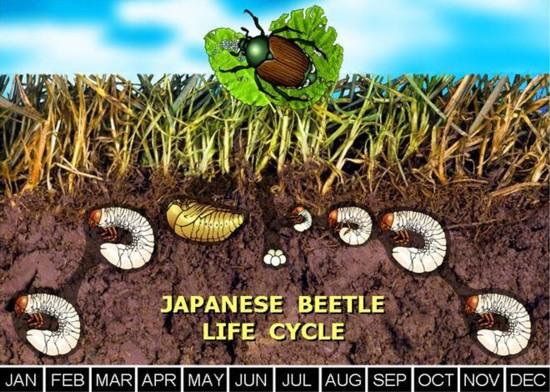 The most susceptible life stage of the Japanese beetle is the newly hatched grub in the soil. The adults mate and females lay their eggs in the soil in grassy areas. These eggs hatch late July into August and are small and close to the soil surface. This is when they are easiest to control. You can use an organic product, called Milky Spore, which is a naturally occurring bacteria that will infect and kill the young grubs. There are also chemical insecticides that can be used, again timing is when those newly hatched grubs are small and close to the soil surface.

Observe which plants in your landscape that may be susceptible to the Japanese Beetle adults. Take note and consider replacing those plants in the future with ones that may not be preferred by the Japanese beetle.