Find this article at:
go.ncsu.edu/readext?591928
— Written By Andrew Baucom and last updated by Nancie Mandeville 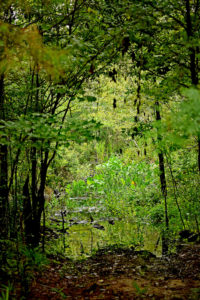 Wetlands are an important natural resource that make up a significant amount of the landscape in North Carolina. They provide many benefits to both the surrounding environment and society. Natural wetlands can occur in many different landscape positions and have diverse characteristics, such as periods of wetness (soil saturation and inundation) and vegetation types. Wetlands are often described by other names, such as swamps, marshes, or bogs, sometimes to capture their different characteristics. For example, a riverine swamp forest has long periods of standing water and vegetation composed mainly of water-loving tree species, such as baldcypress, black gum, and water tupelo. It looks and functions much differently than a coastal tidal marsh that is flooded daily and covered with salt-tolerant herbaceous plants, such as saltmeadow cordgrass and black needlerush.

However, both ecosystems are considered wetlands because they have three characteristics in common:

The NC Department of Environmental Quality (NCDEQ) Division of Water Resources Water Science Section, and the nonprofit Carolina Wetlands Association provides great descriptions of both how natural wetlands form and many of the common wetlands found here. While wetlands are found across North Carolina, the highest percentage of wetlands are located in the North Carolina coastal plain (perhaps as much as 4 million acres, according to NC Division of Coastal Management estimates).

Until the latter part of the twentieth century, wetlands were mostly regarded as obstacles to people’s well-being. Estimates indicate that over 50 percent of the wetlands that existed when colonists first settled our state has been lost. Many were purposely drained and filled for agriculture, development, and mosquito control. Others were damaged inadvertently from nearby activities that resulted in filling by sediment or from pollution. Some people driven by long-standing misconceptions continue to have negative perceptions about wetlands.

But over the past 50 years, researchers have shown that the functions of natural wetlands provide numerous benefits to both society and our economy.

Depending on the type and its location in the landscape, a wetland can provide many services to society. Called ecosystem services, these benefits include the following:

Since the 1980s, federal and state laws have been enacted to provide natural wetlands with more protection. Now when wetlands are impacted, developers may be legally required to replace the lost habitat and functions through wetland restoration or creation. Studies by scientists and engineers have also uncovered many clues to how wetlands remove and transform pollutants, so now wetlands are also being constructed to intercept runoff and wastewater to improve and protect water quality.